Charente seaweed for a healthy, balanced and organic diet!

Partager Charente seaweed for a healthy, balanced and organic diet!
Originally the first forms of life to appear on Earth, algae are the first living beings to have created oxygen 3.8 billion years ago. Traditionally consumed in Asia and particularly in Japan, their nutritional richness is incomparable with any other food in the European food landscape. To learn more about the benefits for the environment and the extraordinary nutritional potential of algae, head to the Ile de Ré for an exciting encounter with the only “ seaweed farmers ” in Charente-Maritime! 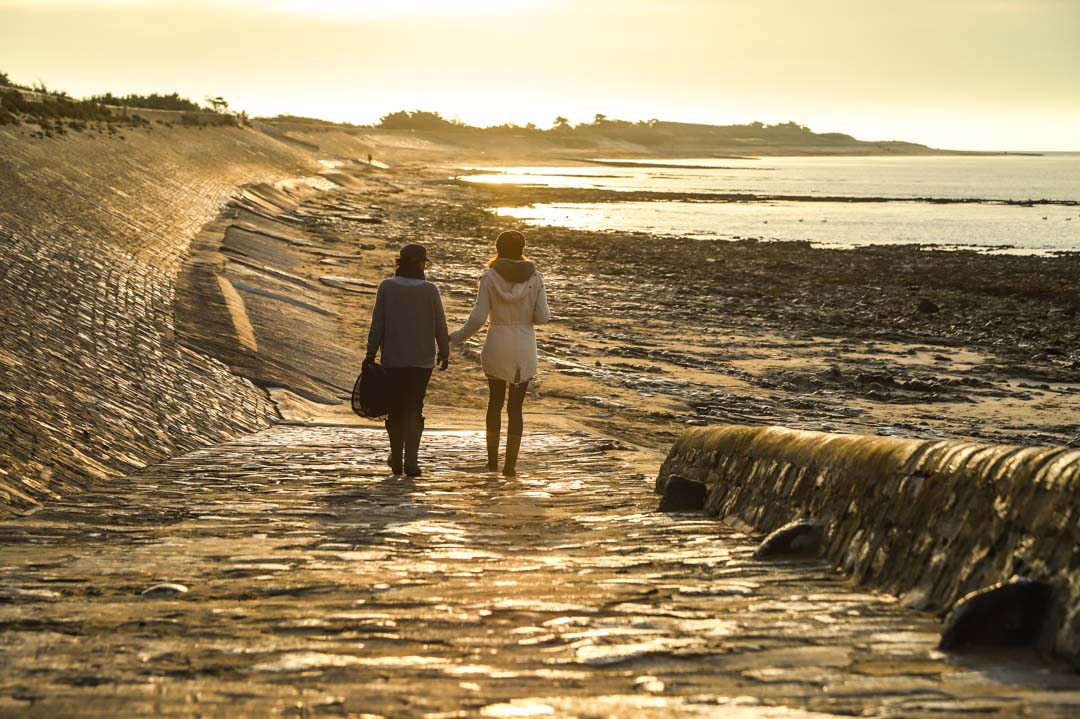 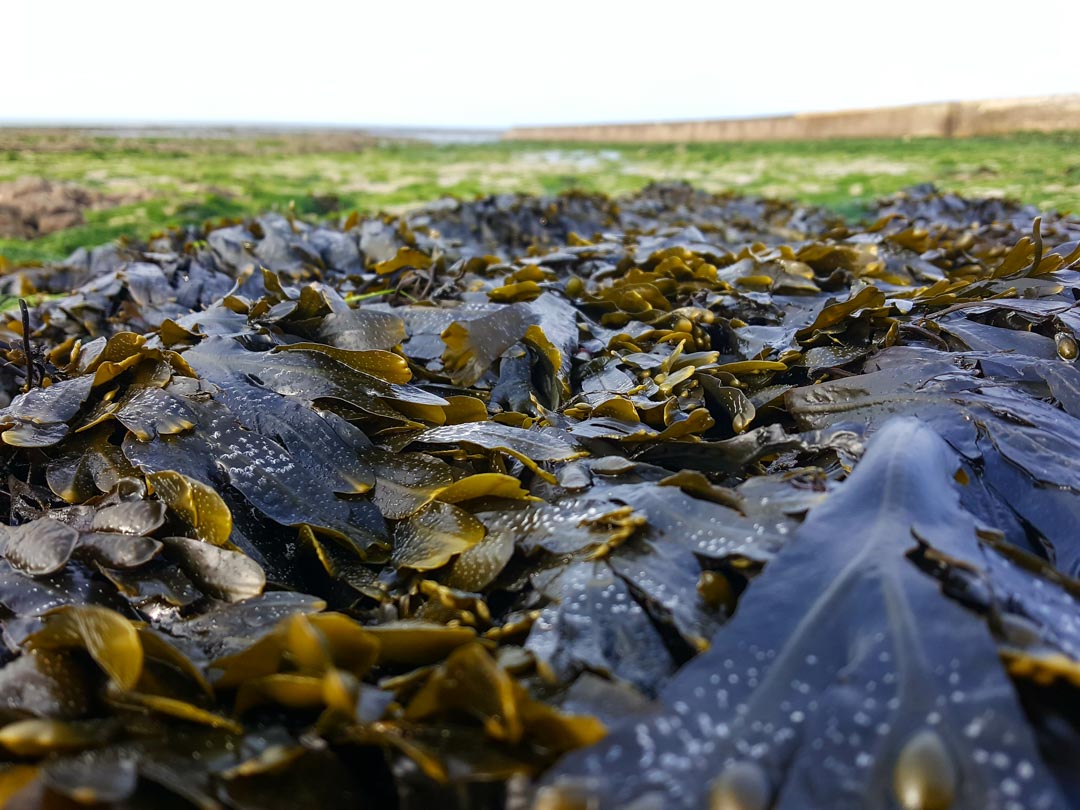 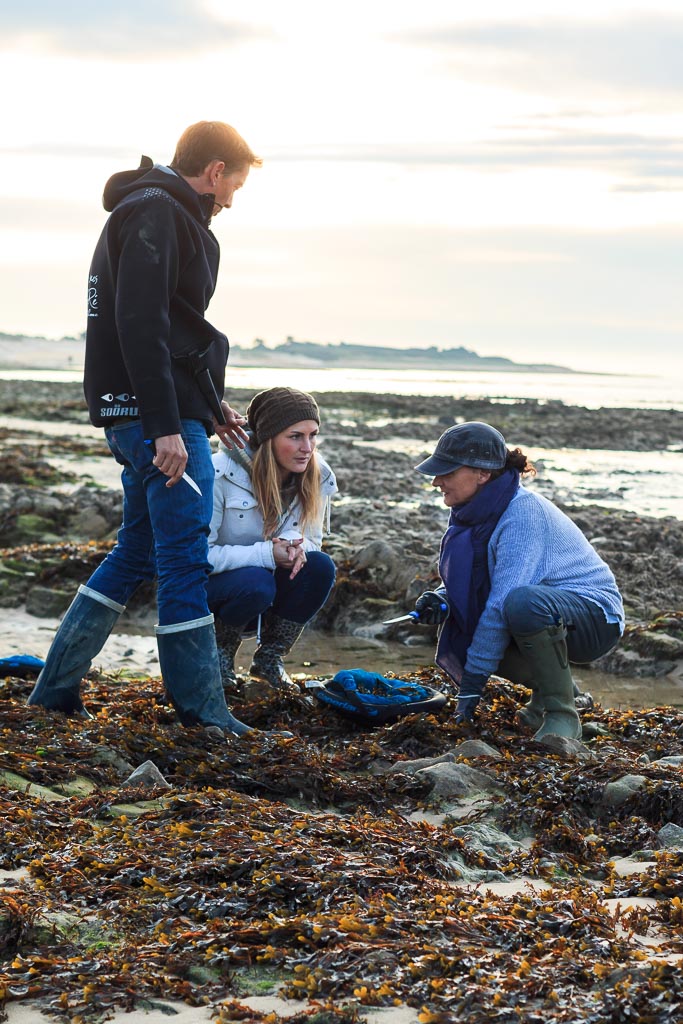 At dawn this morning in Ars en Ré, the ocean reveals an unusual garden by withdrawing. This high tide is the perfect opportunity to explore this fabulous natural multicolored orchard in good company. On the foreshore, in algae paradise, I find Hélène and Tanguy, a couple of committed seafood farmers who have made the protection of the ocean their workhorse.

Water, air and sun to ensure a life cycle

" The algae are finally starting to get the interest they deserve, " says Hélène, scrutinizing the dense tufts of fucus that develop on stones and rocks. Hélène makes no secret of her joy at seeing this expanse of algae proliferate on the northern coast of the Ile de Ré every day. “Forest trees and seaweed are the two lungs of the Earth. Half of the oxygen in the atmosphere comes from the oceans. Today we know the benefits of seaweed farming in the fight against climate change and we are able to cultivate aquatic forests in order to absorb the carbon emitted by our planet, ” says Hélène. The magic of photosynthesis works: algae capture atmospheric CO2, transform it into glucose using the sun's rays and reject oxygen. 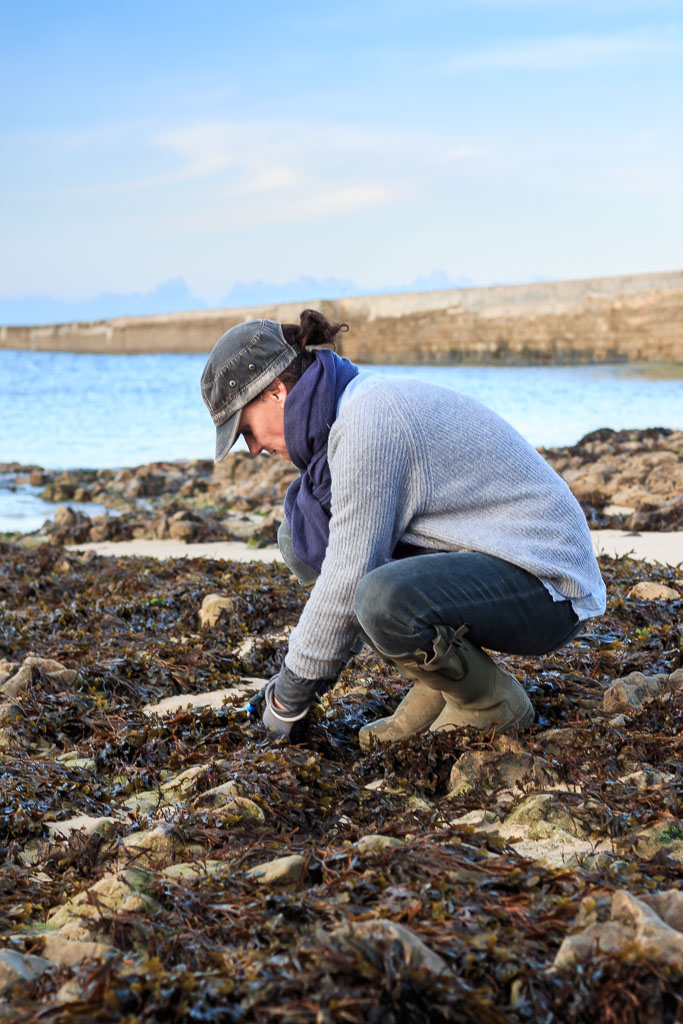 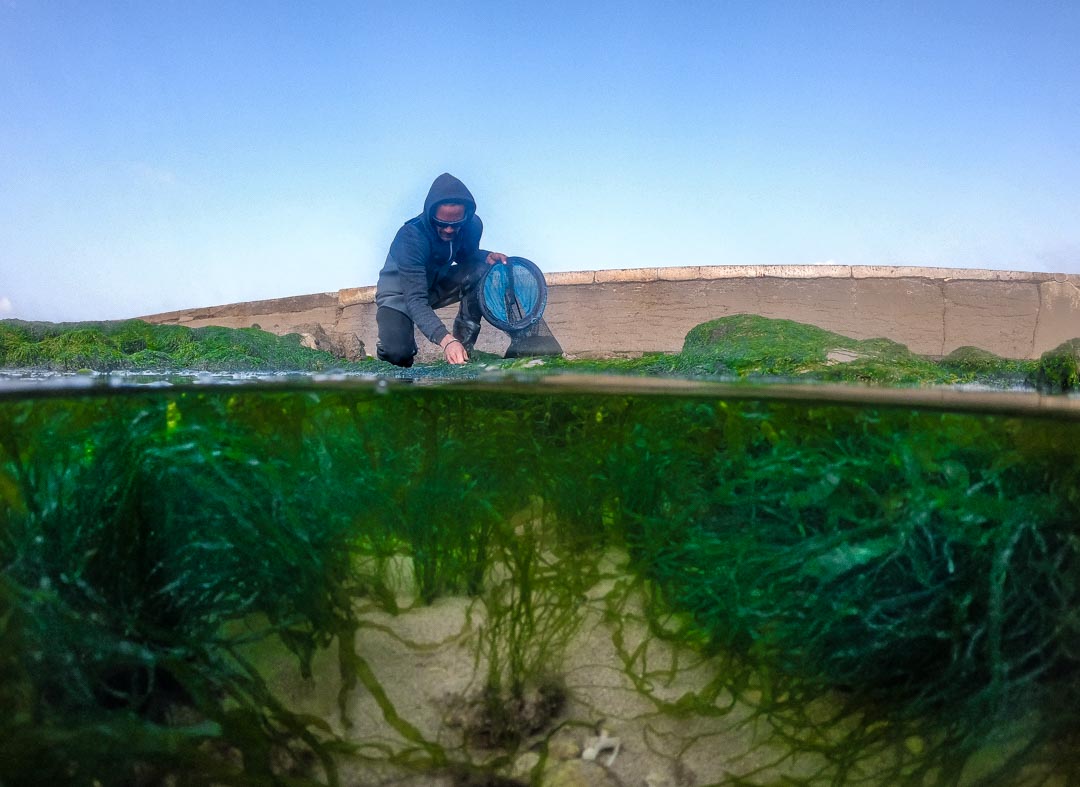 In reality, algae have a much wider ecological field of action. They form the basis of the entire marine food chain and serve as a nursery and shelter for dozens of fish and ecosystem species such as crabs, shrimps, lobsters. But still ? By populating the shallow waters of the coast, algae help fight beach erosion by dampening the waves during strong gales or storms. They thus form a fundamental natural bulwark on an island territory highly subject to erosion, a formidable barrier of protection against the wear of the coast.

This virtuous sphere for the planet is the primary source of inspiration for Tanguy and Hélène on a daily basis. Their approach is simple and impactful: by taking algae from the ocean, they promote their multiplication. When a mature plant is cut meticulously, it releases a multitude of spores which colonize the environment. A 100% natural harvest, eco-responsible and positive for the environment. 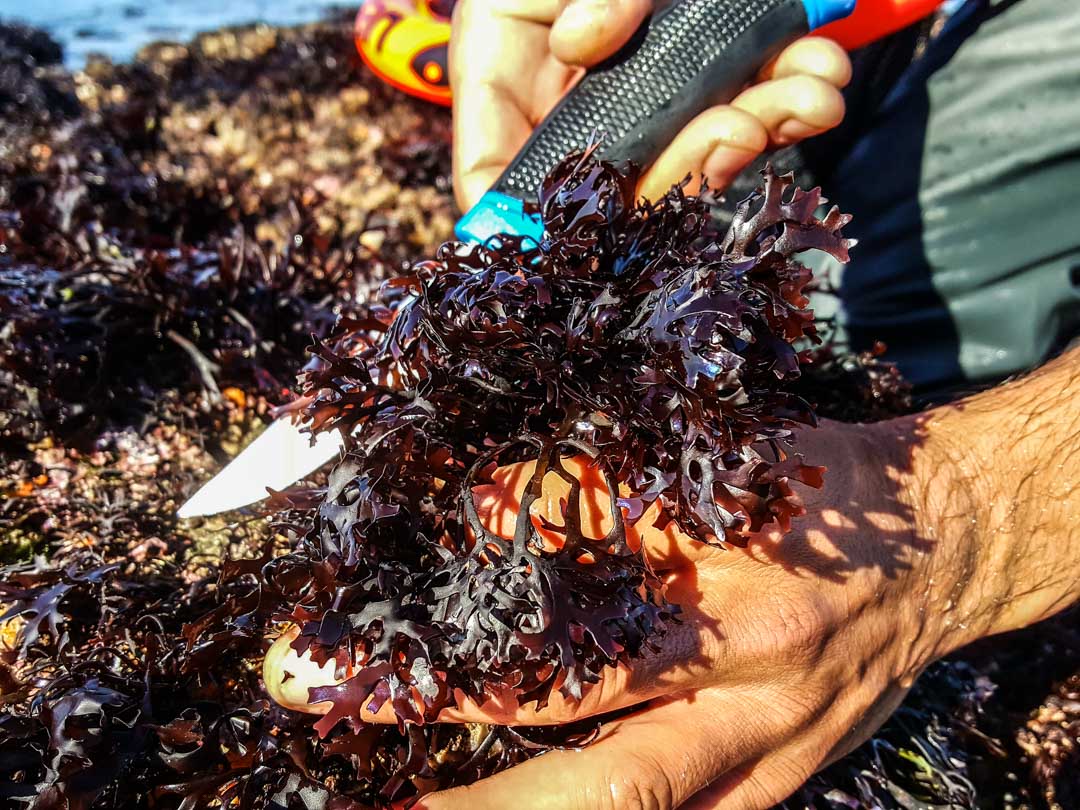 The plant is cut at maturity to optimize its reproduction.

Algorithm, the " civil society of agricultural exploitation " of Hélène and Tanguy is the only one empowered by the departmental management of territories and the sea (DDTM) for the sampling, harvesting and exploitation of algae in Charente-Maritime.

Food algae to consume: an unsuspected reservoir of nutritional resources

In-depth knowledge of the marine environment combined with years of research and tracking enabled Hélène and Tanguy to found “ Les Algues de l'île de Ré ” in 2016. Their ambition? Biodynamize the coastline of Ré and raise public awareness of the benefits of algae both ecologically and foodally. By working in close collaboration with oyster farmers and sea professionals, the University of La Rochelle, this team of enthusiasts today collect around thirty prolific varieties of algae over more than 44 km of coastline. They also rehabilitate hectares of abandoned salt marshes for the cultivation of seasonal algae. After 3 years of activity, the result is spectacular: the coastline is again botanized and the virtuous circle of the ecosystem is restored.

The incredible virtues of algae in food 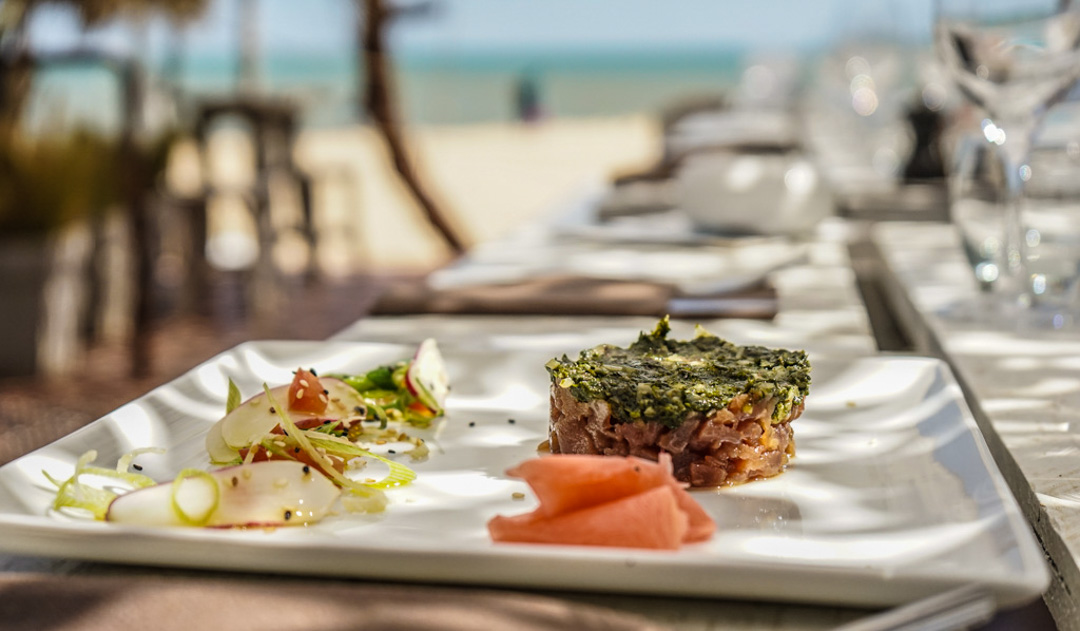 Exceptionally rich in vitamins B1.2.6.9.12, C, D, Z, E, minerals and trace elements, seaweeds are revitalizing foods that must be discovered at all costs!

Consuming seaweed allows you to benefit from this abundance of vital elements and quality proteins. Sea lettuce, aonori, nori, wakame, fucus, agar-agar, chondrus crispus lend themselves, like vegetables, to many preparations and appear more and more on the menu of gourmet restaurants . In addition to their health benefits, their range of culinary flavors and sea scents are close to those of undergrowth, mushrooms or spinach. 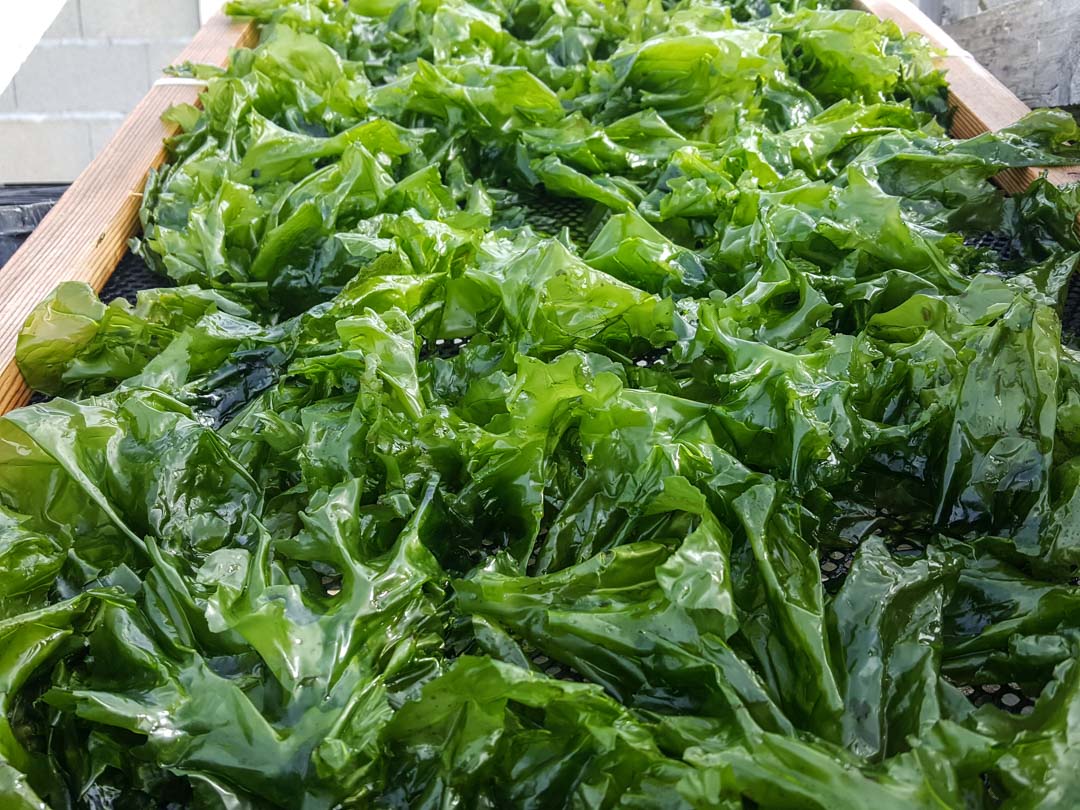 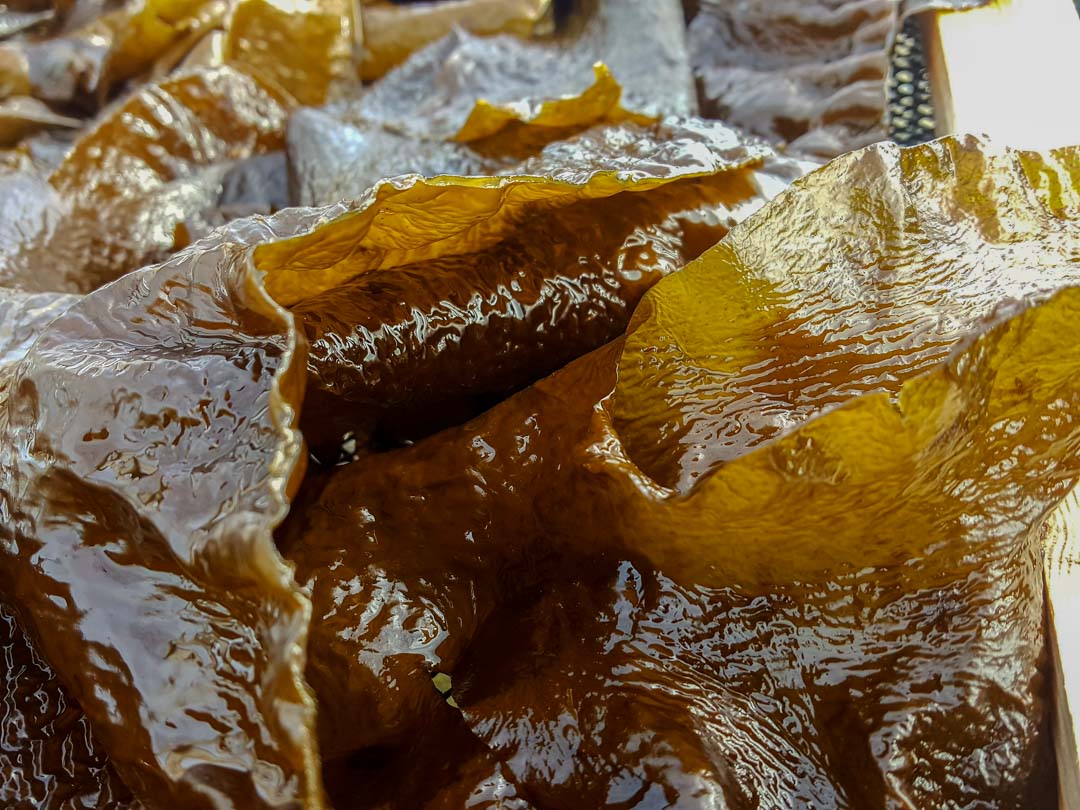 Nori, for example, is a fine dark red seaweed used to coat Japanese maki with a subtle iodized taste. In addition to enhancing the flavor of raw fish, nori seaweed is a concentrate of nutrients that contain almost 30% more protein than meat and almost ten times more calcium than milk.

Apple-green in color, sea lettuce provides omega-3 and omega-6 series polyunsaturated fatty acids in addition to being a very good source of calcium, vitamins A and C, iron and magnesium. Eight times more energizing than orange, sea lettuce comes close in the mouth to the flavors of spinach or sorrel. 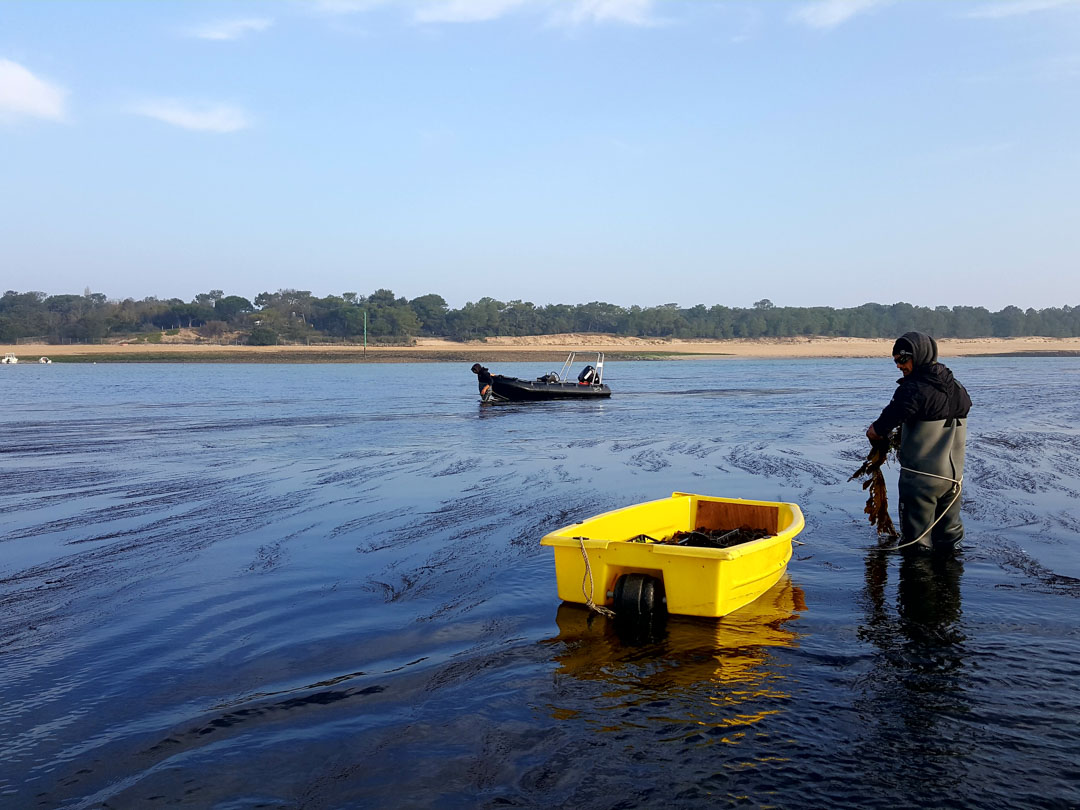 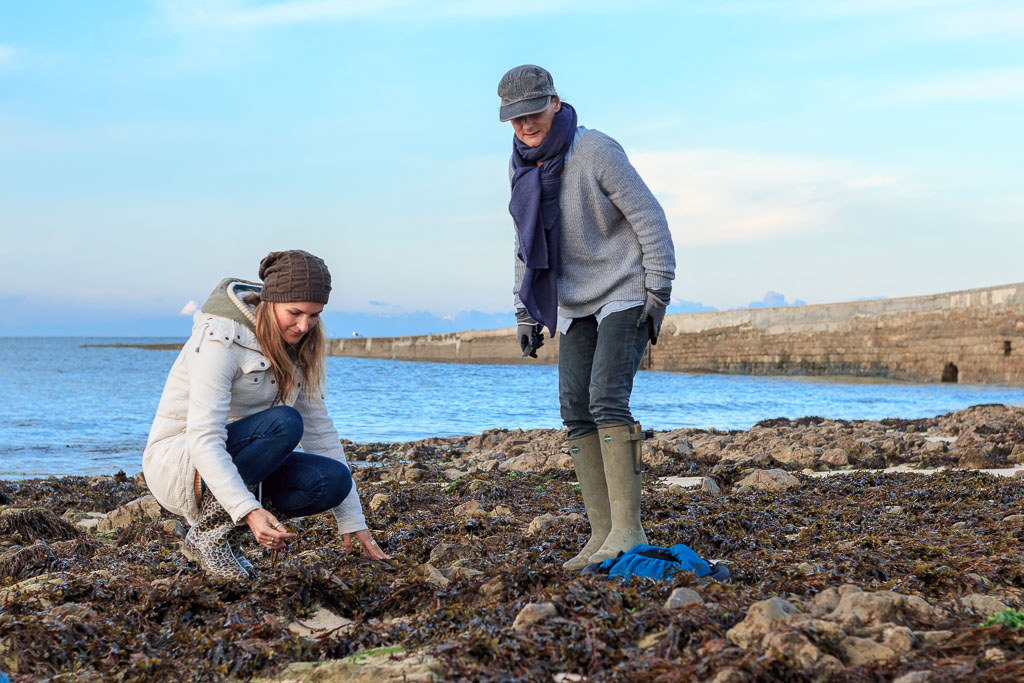 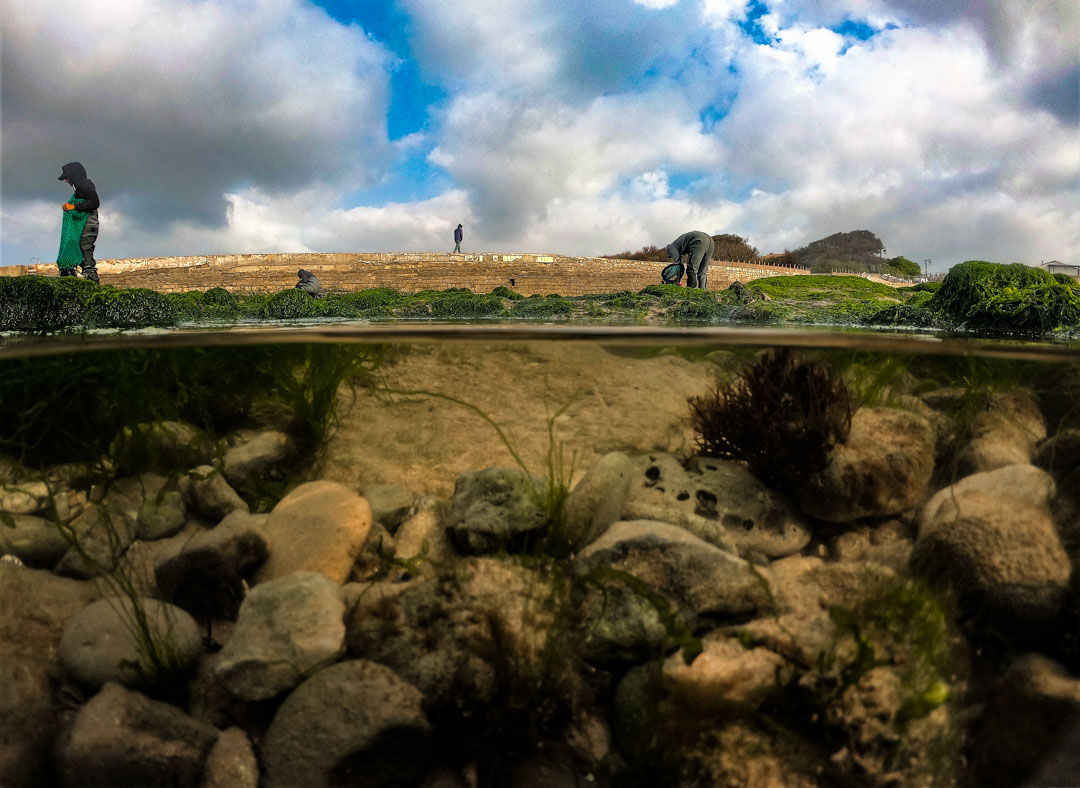 These true vegetables from the sea are harvested throughout the year by Tanguy, Hélène and their team in 8 fishing zones located in the northern canton of Île de Ré and in the marshes. Respectful of the aquatic environment, their production method obeys the principles of sustainable management of the resource.

In the artisan workshop of Ars en Ré, the algae are immersed in fresh water baths, rinsed and drained before reaching the dehydration greenhouse where they are dried at low temperature. They are then ground into flakes and conditioned to be rehydrated. To keep all the freshness and benefits of seaweed, this process takes less than 24 hours!

The exceptional richness of the Algae on the Ile de Ré is explained by the quality of the ocean. Tanguy and Hélène's edible marine algae are stamped organic thanks to the extremely pure water quality in the operating areas, confirmed by regular water mass surveys.

I invite both amateurs and novices to discover the world of seaweed: learn to recognize them, learn more about their harvest and learn about seaweed cooking. The “ Algae from the Isle of Ré ” in flakes rehydrate directly in contact with food by sprinkling them on the dishes or by incorporating them into marinades and sauces. A pleasure for the taste buds and a perfect ally for health! 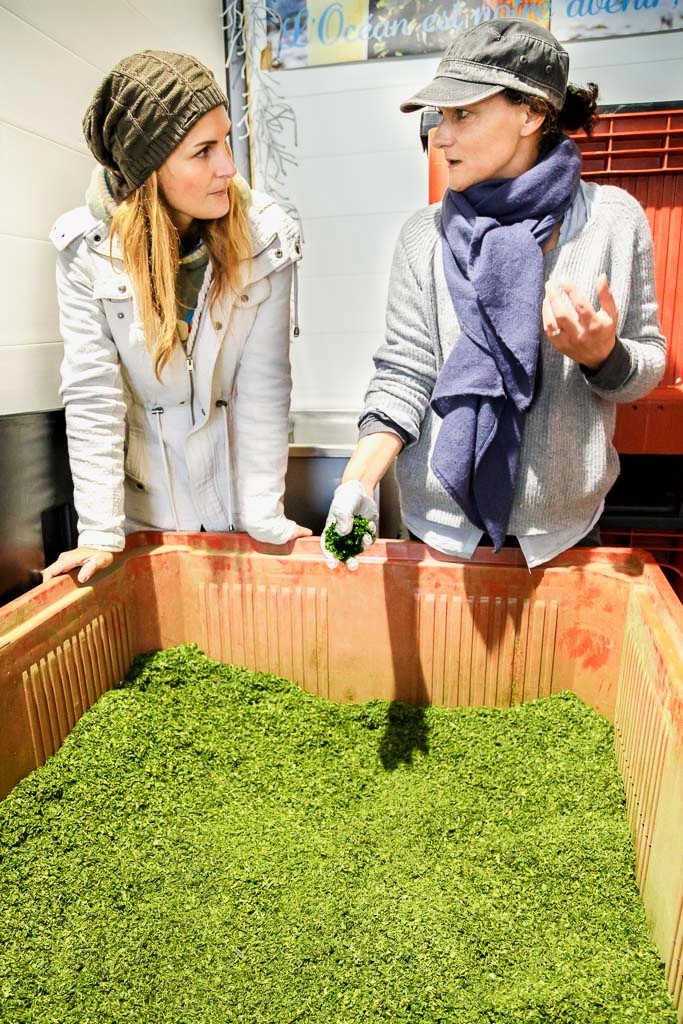 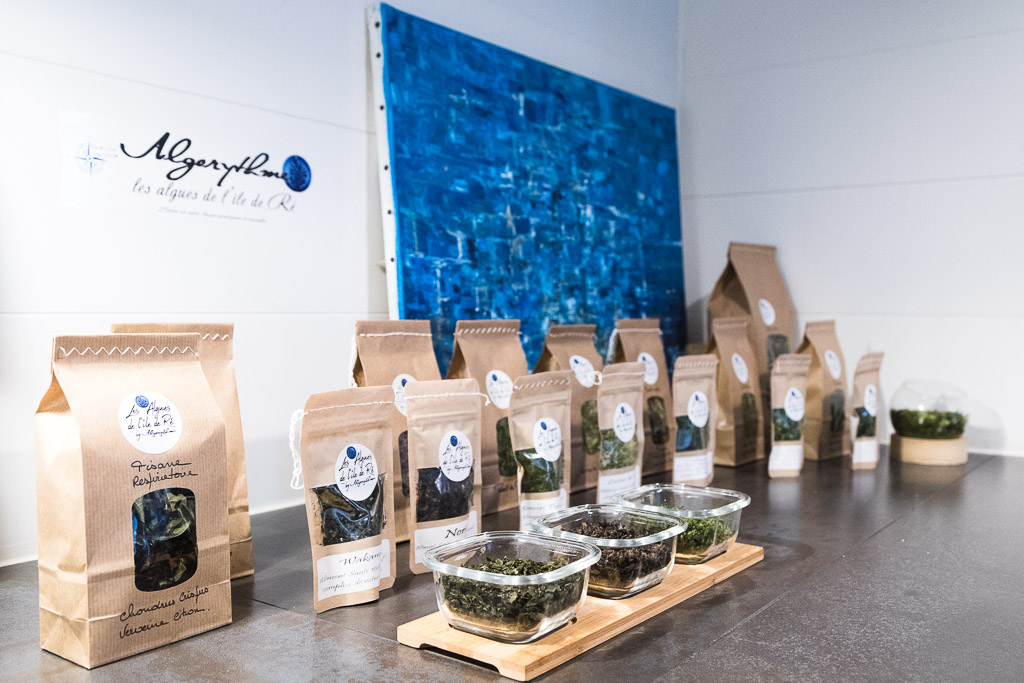 The range of Algae from the Ile de Ré

Note that it is not recommended to collect algae yourself in the water or on the beach but rather to consume algae sold in organic shops or online, such as " Algae on the island of Ré " . 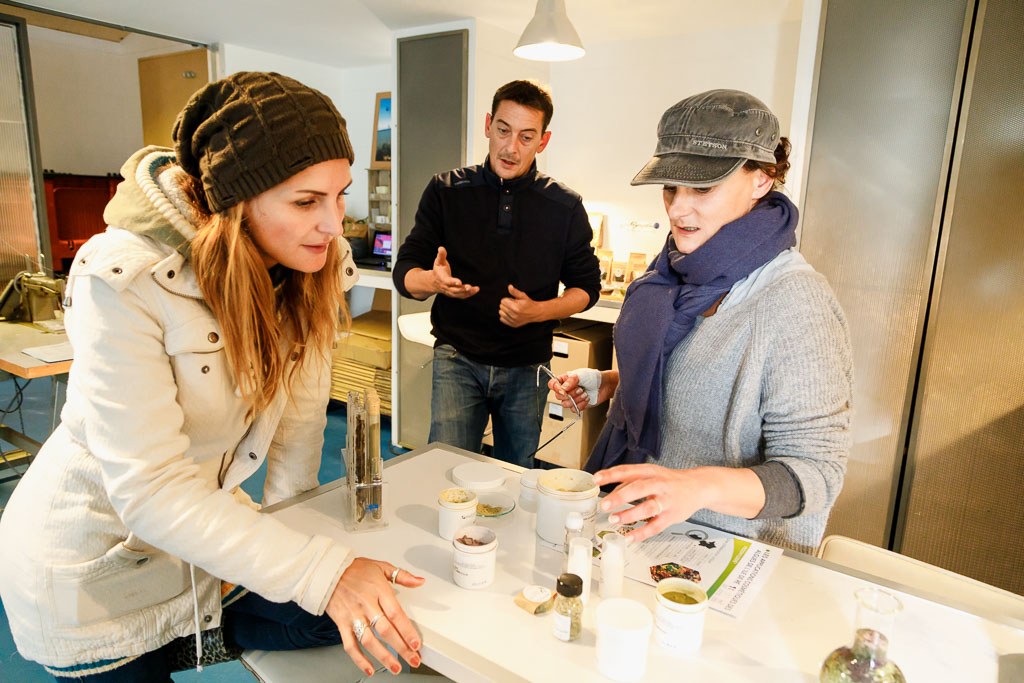 In cosmetics, the reputation of the benefits of algae is well established.


Back to "Culture and Heritage"