From island to island 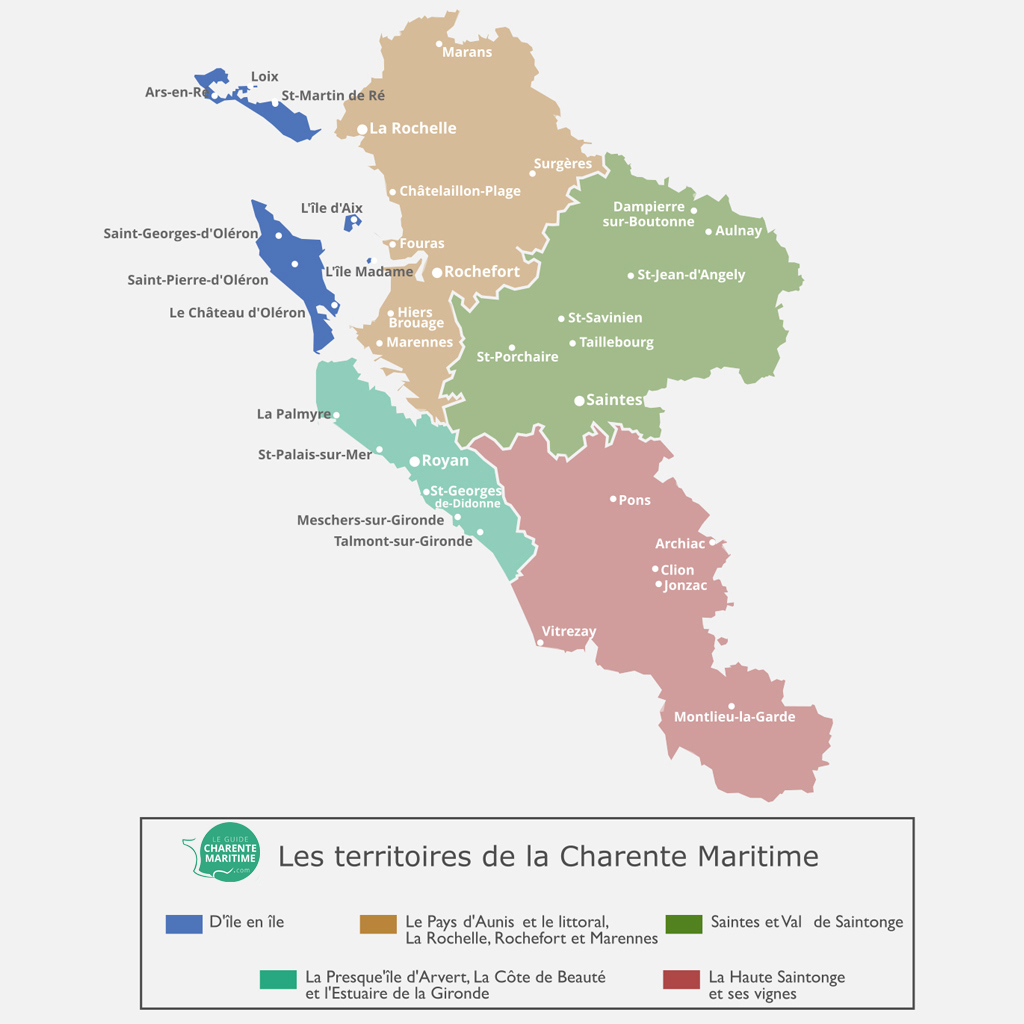 The four islands of the Charente peninsula are as attractive as each other. Their natural environment, their sunshine, their history, their beautiful beaches, their good living forge their identity and make them enviable and enticing places to live and visit. For a weekend or holidays, it is the dream destination.

The île de Ré is 30 km long and 5 km wide. It is surrounded by the clear, warm waters of the Gulf Stream. It has golden sandy beaches, white houses, hollyhocks and mimosas, salt marshes, small characterful villages, vineyards, pine maritime forests and holm oaks, and thalassotherapy (seawater therapy) centres. The île de Ré appeals to everyone. The island also attracts many celebrities. The eastern side of the island is farmed: fruit and vegetables, vines and the famous “Grenailles” potatoes (new potatoes). 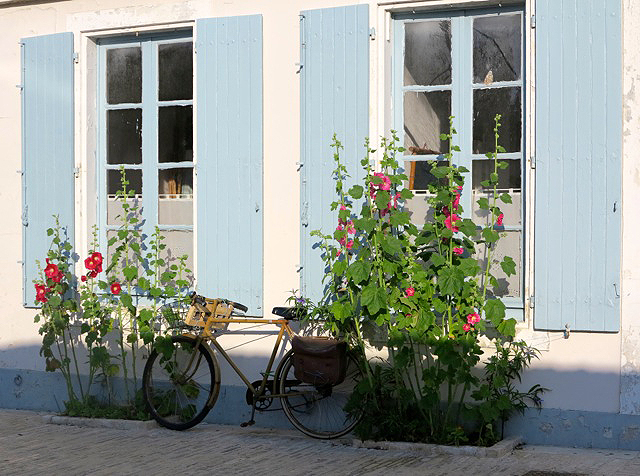 Once you cross the bridge, you can cycle, from village to village, making some stops on the beautiful fine sandy beaches. You can do the same thing by car. Non-residents pay a toll on the bridge.

Rivedoux-plage is at the entrance to the island and has beautiful beaches and oyster farms. Heading towards the D35, you reach Prée Fort then Châteliers abbey. This is a former Cistercian abbey built during the 12th century and restored in a Gothic style during the 15th century. Today, only the façade and walls remain. The abbey is attached to the commune of La Flotte, a former fishing village and listed “plus beau village de France” (one of the most beautiful villages in France).

Saint–Martin-de-Ré is in some respect the capital of the island. The harbour and its alleyways are full of charm. Its fortifications were modified by Vauban and are listed as a Unesco World Heritage site. Close by, Barbette park overlooks the sea. The citadel still houses common law prisoners. Located in a 16th century building, the Museum Ernest-Cognacq (named after Ernest-Cognacq, a native of the île de Ré and founder of La Samaritaine Department store in Paris) has an exhibition of île de Ré heritage and artefact collection. The Church of Saint-Martin, once fortified, offers a fantastic panorama over the island from its bell tower. The vistas are worth climbing 117 steps. 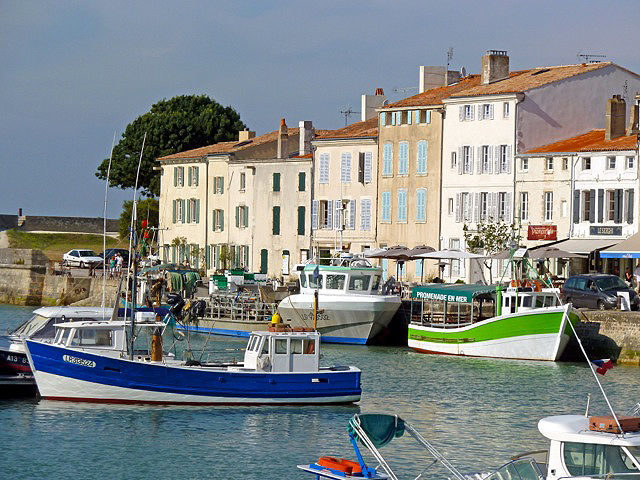 Going north you will reach a small road that winds through the salt marshes (visit the saline ecomuseum) to the village of Loix, situated on a peninsula on the island. It makes a picturesque place to stop. A loop of 10 km leads to a tide mill, once used to clean the salt at Grouin point.

Ars en Ré has many boats in its marina. The village is listed "plus beau village de France" (most beautiful villages in France). The bell tower of the church of Saint Etienne has uncommonly been painted black and white. This is because it was used as a marker for the sailors before the building of lighthouses.

At the extreme eastern side of the island, the village of Saint-Clément des Baleines, was created out of six hamlets. Overlooked by the 57 metre high Phare des Baleines (the whales’ lighthouse) it offers a superb panorama. The village is situated between the Côte Sauvage (Wild Coast) and the large fine sandy beach of La Conche, on the borders of the forest.

Les Portes en Ré is situated on the north west of the island between forests and salt marshes. It is also the departure point for visiting the Lilleau nature reserve of the Niges which is full of 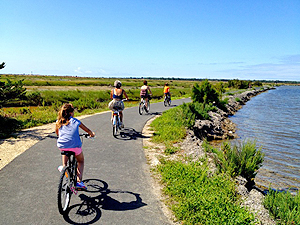 hundreds of species of birds. “Maison du Fier” (house of the proud) houses exhibitions, and a little further into the famous “Bois de Trousse Chemise” sung by the renowned French singer Charles Aznavour.

The village has the only music kiosk on the island.

Bois-plage en Ré is located on the south coast of the island. Its large beaches, sand dunes and pine trees form an ideal setting.

Sainte-Marie de Ré is the oldest village on the island.

Rent a bike HERE on the île de Ré

It is the largest island off the Charente Maritime coast. The île d’Oléron is 30 km long and 6 km wide. Beaches, oysters farms, marshes, state-owned forests, sand dunes, cliffs…There are many different places to see on one island. The Atlantic Ocean is a fantastic playground to practice many different water sports. The île d’Oléron can be reached by a bridge (no toll) built in 1966. There are 100 km of cycling paths which have been created to explore the island. On the west coast, the île d’Oléron is calm and ideal for family swimming. A wild coast, more exposed to the winds and waves and perfect for surfing, can be found on the eastern side. 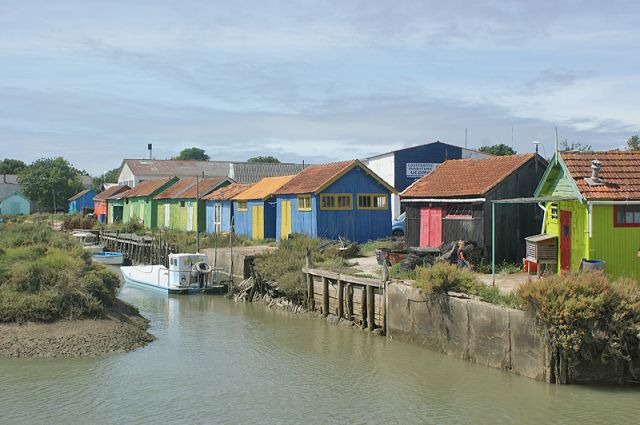 Saint-Pierre-d’Oléron is the geographic, economic and trade centre of the island. It is the capital of the île d’Oléron due to its population size. The church has a 32 m hexagonal bell tower which was used as a marker for sailors. At the old cemetery, a structure called the lantern of the dead can be seen. It is in the garden of the “maison des aïeules” (ancestors house), a family residence where the writer and academic Pierre Loti is buried. The village houses a museum of île d’Oléron traditions and heritage. Heading south, you reach the port de La Cotinière, the main fishing harbour of the Charente Maritime. You will see multicoloured boats, where seabass, sole, and langoustines are unloaded... 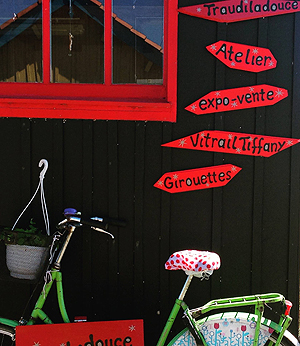 Saint-Georges-d’Oléron is one of the oldest and largest villages on the island. Its 12th century roman style church is a pearl of architecture. At the north end, in a nature and wilderness area, the 46 metre high Chassiron lighthouse, houses a museum and offers superb views across the island, the île d'Aix and the île de Ré. Many fish pens, typical of the Charente islands, are visible at low tide. The exceptional site of Fort Royer, in the nature reserve of Moëze-Oléron, has a typical landscape of multicoloured oysters cabins. In Brée- les-bains a 15th century windmill can be seen.

Château d'Oléron is located in the far southeast, is the ‘oyster capital'. Formerly a stronghold, Château d'Oléron still has the ruins of the fortifications and one citadel. In the south west of the island, Saint Trojan-les-Bains, a seaside resort, has lovely fine sandy beaches and a 2,000 hectares maritime pine forest. At the end of the 19th century and the beginning of the 20th

century new villas gave a peculiar charm to the resort. The ubiquitous mimosa in the town has led to a Mimosa festival which takes place in February. A thalassotherapy (seawater therapy) centre has provided cures for many patients. Grand Village Plage like Dolus d’Oléron can boast the most beautiful beaches on the island. Some not to be missed sites are Port des Salines with its salt marshes and its ecomuseum, and the Marais aux oiseaux (bird marshlands), a must for all nature lovers.

Did you know? The île d'Oléron is the second largest French island after Corsica.

Rent a bike HERE on the île d'Oléron

ÎLE D’AIX, between sky and sea

3 kilometres long and 700m wide, the île d'Aix is surrounded by fortifications, and has small white houses surrounded by hollyhocks during the summer months. Beaches, wild creeks, undergrowth and vines form the landscape that can be found either on foot, by bike or even by horse and carriage. The “Sentier des douaniers” (the path of customs officials) provides a full circuit of the island.

On the western side of the island, in the forest, is Fort Liédot. Nicknamed the 'peak fort' as it is located on the highest point of the island. It is 9 metres high and built as a means of defence. It was a prison for a very long time. Cistercian monks, the first island inhabitants, occupied the Church of Saint-Martin and its priory. 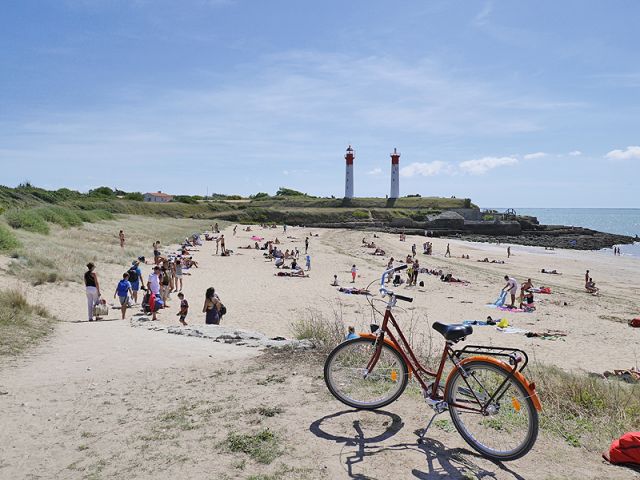 You can reach île d’Aix by boat from Fouras, and during the summer, from La Rochelle, île d’Oléron or île de Ré. Once you reach the fort de la rade, take the drawbridge which takes you to the Place d’Austerlitz. Napoléon stayed on Aix after the Battle of Waterloo. We must thank Baron Gourgaud, the great great grandson of one of the ordnance officers attached to the emperor for this legacy: a museum with portraits, statues, artefacts of Napoleon's, relics …There is also an African museum which has a collection of artefacts brought back from Zaïre and Kenya in the 1920s and 1930s. Mother of pearl is worked on the island, in one of the last workshops of its kind. 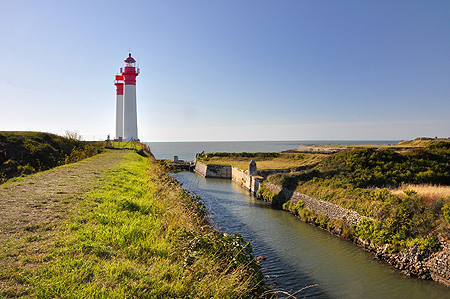 From the pier, you can see Fort Boyard. Originally built to guard the mouth of the Charente river and to protect the arsenal at Rochefort from Royal Navy attacks. This huge stone edifice was built to accommodate a garrison of 260 men with 74 canons on 3 levels, but it became obsolete before it was finished in 1859, because of the increasing use of artillery. Fort Boyard became a prison, and for the past few years, it has been the location for the TV gameshow of the same name. Fort Boyard is not open to the public for visits but it can be approached by organized boat trips from Boyardville harbour, St-Denis or Bourcefranc from April to September. 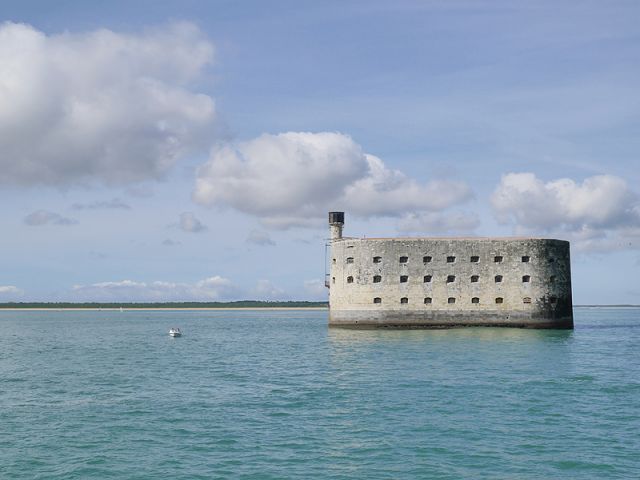 Rent a bike HERE for the île d'Aix

ÎLE MADAME: the smallest OF THE islandS OF THE PENINSULA.

You can access the island during low tide from Port des Barques by going along the “passe-aux-bœufs”. This is a primitive landscape over 70 hectares. To the north, an 18th century fort gives a beautiful view of the île d’Aix, Fouras and the île d’Oléron. In the southeast, laid out on the ground there is a cross made from pebbles. This marks the place where 254 priests, who refused to swear allegiance to the State, were buried during the French Revolution. Each year, during August, a pilgrimage honours their memory. In the middle of the salt marshes, an aquaculture farm offers oyster and shellfish tasting. 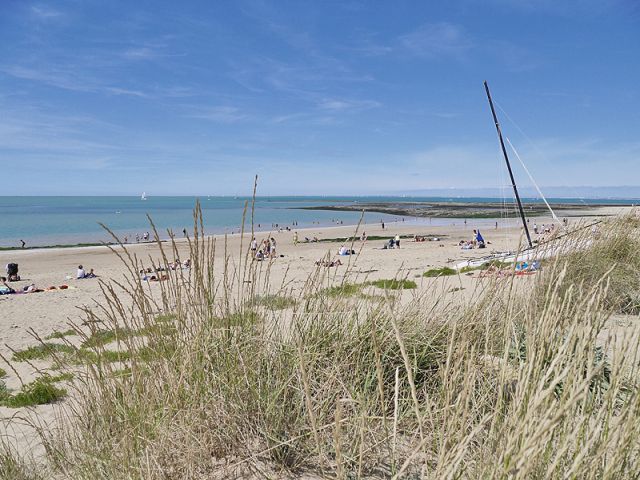